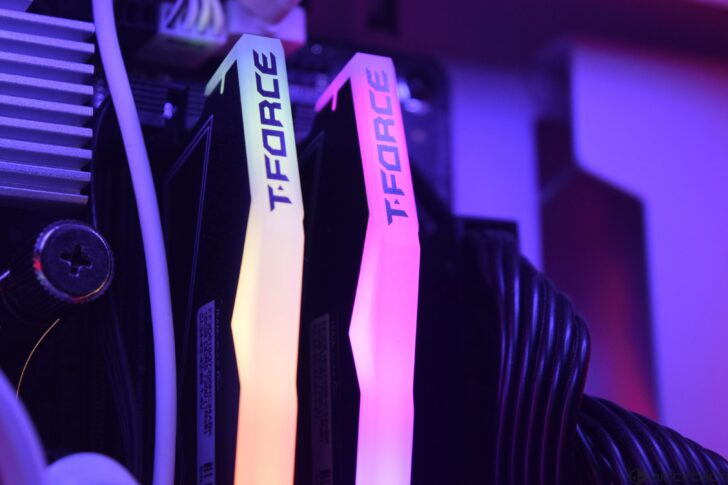 TeamGroup is the creator of some of the most high-quality memory products for the PC industry. They have come a long way since its inception in 1997 and went on to become one of the fastest-growing product manufacturers and a leading brand around the globe.

Since the arrival of DDR4 memory in the mainstream market, TeamGroup started a separate line of DIMM kits under their new T-Force brand. The T-Force brand is the more enthusiast and gamer-aimed memory series with a sheer focus on quality and performance. For this review, TeamGroup sent me their brand new T-Force DELTA RGB DDR5-7200 32 GB CL34 & the T-Force VULCANα DDR5-6000 CL30 memory kits.

The TeamGroup T-Force DELTA RGB 32 GB DDR5 memory kit is designed to offer a combination of great gaming aesthetics and performance. The kit I received is optimized at a clock speed of 7200 Mbps (PC5-57600). The memory kit consists of dual 16 GB DIMMs which make up a total of 32 GB in capacity.

The memory kit has a tested latency spec of CL34 and the timings are 34-42-42-84 for this specific kit. The voltage set at reference is 1.40V and the memory kit comes in an unbuffered package with an on-die ECC (Error Correction) design. The memory kit is fully compliant with Intel’s XMP 3.0 and can be easily set to its rated clock speeds through the BIOS shipped on the Z790 motherboards.

The T-Force DELTA RGB 32 GB DDR5 memory kit is one of the most interesting design choices I have seen on DDR5 modules yet. It features an aesthetic choice that is tailored-made for gamers and has an aluminum heat spreader across the memory ICs along with an RGB LED diffuser on the top which looks great.

The T-Force DELTA RGB series comes in a small cardboard package. It has red and black accents all over it. The front of the package has the name and specifications sticker along with the marketing logos for the T-Force and DELTA RGB brands. The front also reads the Lifetime Warranty for the DDR5 memory kit.

The back of the box lists a brief overview of the T-Force brand along with detailed features of the T-Force DELTA RGB series memory. The package also includes warranty paper & a T-Force logo sticker.

Out of the box, I can note that the DELTA RGB from T-Force isn’t your standard DDR5 DIMMs and actually rock a very premium look with a matte black aluminum shroud and the RGB diffuser in a very aggressive design.

The T-Force DELTA RGB series memory modules feature a large diffuser that is embedded on the top of the DIMMs.

The front side of the T-Force DELTA RGB DDR5 memory has the T-Force, DELTA, and DDR5 RGB labels while the other side has a sticker with the serial number and the specifications listed.

The dual-tone looks fantastic and the RGB lighting makes this memory kit look great with almost all kinds of builds.

The large diffuser does make the modules stand out a bit taller which might cause an issue in terms of heatsink clearance if you’re running an air cooler. Otherwise, the memory is one great piece of work by T-Force.

Following is how the TeamGroup T-Force DELTA RGB DDR5 memory kits look like when installed on your PC:

The TeamGroup T-Force Vulcanα 32 GB DDR5 memory kit is designed to be a mainstream and value-oriented option with the DDR5 family. The kit we received is optimized at a clock speed of 6000 Mbps (PC5-48000). The memory kit consists of dual 16 GB DIMMs which make up a total of 32 GB in capacity. Some main features of the T-Force Vulcanα series are listed below:

The memory kit has a tested latency spec of CL38 and the timings are 38-38-38-78 for this specific kit. The voltage set at reference is 1.25V and the memory kit comes in an unbuffered package with a non-ECC (Error Correction) design. The memory kit is fully compliant with Intel’s XMP 3.0 & AMD’s EXPO profiles and can be easily set to its rated clock speeds through the BIOS shipped on the latest motherboards.

The T-Force VULCANα series comes in a small package. It has red and black accents all over. The front of the package has the name and specifications sticker along with the marketing logos for T-Force and VULCANα.

The back of the box lists a brief overview of the T-Force brand along with detailed features of the T-Force VULCANα series memory. The package also includes warranty paper & a T-Force logo sticker.

Out of the box, I can note that the VULCANα rocks a very simple design with a standard DIMM profile size.VULCANα won’t lead to compatibility issues with air coolers since the height isn’t extended like some other RGB options out in the market.

The T-Force VULCANα, although very simple in design, still looks great. The angular touches on the aluminum frames and the T-Force logo in the middle look great.

You won’t get any flashy lighting on the VULCANα series since these are budget-tier options but the design itself looks great from every angle. If you’re looking for RGB options, Team group has a ton of options in their T-Force brand but they also cost a lot more.

Black is a very neutral color when it comes to building PCs so the color scheme itself won’t be much of an issue. T-Force VULCANα also comes in red color so you get some option to select a kit based on your own preferences.

Now for the weight, the T-Force VULCANα weighs around 32 grams which is not too much. This is due to the low profile design and no aggressive use of bulky metal frames or RGB solutions. The height and weight make the kit a perfect choice for HTPC and small form factor PCs.

For testing, I used the latest Intel Core i9 13900K processor along with the Gigabyte Z790 AERO G motherboard which can support higher frequencies memory without any issues. The XMP profile for each respective ram kit was enabled. That’s 7200 Mbps CL34 for the DELTA & 6000 Mbps CL40 for the Vulcan kit.

I have separated the performance tests into two sections. The first section consists of pure synthetic and general workload tests while the second section would be focusing on gaming performance and how different games are affected by higher-clocked memory sticks.

For AIDA64 memory tests, I ran the kits at both stock and overclocked speeds. The stock speed was configured at the XMP 3.0 profile of 6000 Mbps CL40 for the T-Force memory kit.

Super PI is used by many overclockers to test the performance and stability of their computers. In the overclocking community, the standard program provides a benchmark for enthusiasts to compare “world record” pi calculation times and demonstrate their overclocking abilities. The program can also be used to test the stability of a certain overclock speed.

WinRAR is a powerful archive manager. It can back up your data and reduce the size of email attachments, decompress RAR, ZIP, and other files downloaded from the Internet, and create new archives in RAR and ZIP file format.

Gaming applications generally don’t see huge gains with different memory kits but DDR5 has enabled a huge gain in memory frequency which can impact gaming performance. Moving from the stock 2133 Mbps (DDR4) to 6000+ Mbps can have a huge effect on performance and the improved CAS timings on some of the high-end SKUs can result in better overall FPS and system responsiveness.

Furthermore, while 8 GB has become the standard for gaming PCs, modern applications such as editing software and multi-tasking users can benefit hugely from 16 GB and 32 GB kits which have become more common in the gaming market over the last couple of years.

Conclusion – A Memory Solution For Everyone!

The TeamGroup T-Force DELTA RGB DDR5 series has received a nice upgrade over its Delta R series predecessors based on the DDR4 standard. With DDR5, T-Force has delivered higher performance & faster transfer speeds, that in return provide nice gains in applications and gaming. The memory also features enough headroom for overclocking. Even with its 1.40V stock XMP voltage, the DIMMs can be pushed to +300 Mbps with ease. The net return is minimal over the JEDEC 4800 Mbps speed but you can tinker around and get even better overclocks.

With that said, DDR5-7200 is just an impeccable speed and users running the Intel 13th Gen Raptor Lake CPUs on high-end motherboards should definitely find this kit a great option. When it comes to pricing, high-end products do tend to carry a premium and you’ll end up paying over $350 US for this particular kit which can be overclocked with ease. However, if you are looking for a more value-oriented option, then TeamGroup has you covered with its Vulcan Alpha series.

The TeamGroup Vulcan Alpha series comes at a price of $168.99 US and features DDR5-6000 speeds and optimized CL38 timings. This is a particularly good kit if you are planning to build powerful AMD Ryzen 7000 PCs since this kit supports EXPO profiles. The memory kit offered outstanding performance for its price and is definitely a recommendation for new Ryzen PC builders.