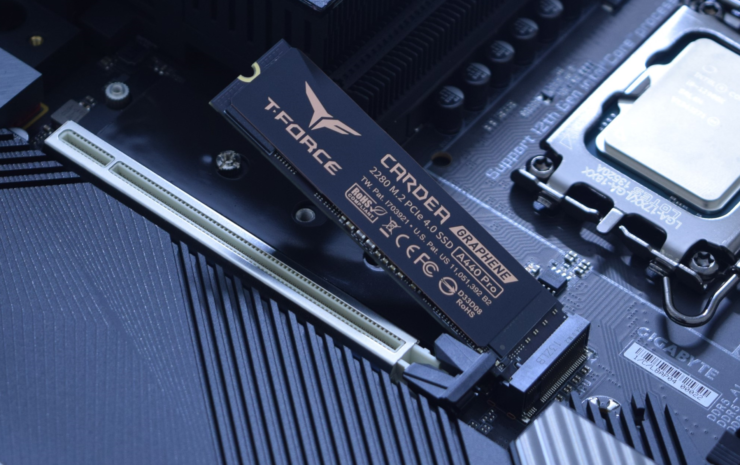 TeamGroup is the creator of some of the most high-quality memory products for the PC industry. They have come a long way since their inception in 1997 and went on to become one of the fastest-growing product manufacturers and a leading brand around the globe.

Since the arrival of DDR4 memory in the mainstream market, TeamGroup started a separate line of DIMM kits under their new T-Force brand. The T-Force brand is the more enthusiast and gamer aimed memory series with a sheer focus on quality and performance.

The company later expanded the T-Force brand into their entire gaming portfolio which includes SSDs, gaming peripherals, and more.

T-FORCE is TEAM force. The red “T” on the logo of “TF” represents TEAMGROUP’s passion for the storage products. The black “F” represents TEAMGROUP’s over 18 years of promotion of storage products. The visual design of the perfect combination elegantly symbolizes a pair of flying wings. They represent that the high quality and extreme performance gaming products from TEAMGROUP are capable of allowing all gamers to break the speed limit and enjoy the ever-changing world of gaming.

Today, I will be testing the TeamGroup T-Force CARDEA A440 PRO 2 TB Gen 4 SSD which is priced at a very premium $359.99 US for the Graphene & $395.99 US for the Aluminum heat spreader variant. This is the flagship SSD from TeamGroup for 2021 and features some insanely high speeds so let’s get into the specifications of this little monster!

TeamGroup expands its T-Force CARDEA lineup with the A440 PRO, an upgraded variant of the A440 but with focus purely on high-end Gen4 performance.

Furthermore, the 2 TB model is priced slightly above the premium offerings with a cost of $359.99 US which gets you really high-speeds out of the box. In terms of performance, TeamGroup T-Force CARDEA A440 PRO 2 TB has sequential read speeds of 7400 MB/s and write speeds of 7000 MB/s.

The Random read speed of the drive is up to 1000K IOPS and the write is 1000K IOPS too. The endurance of the lineup is rated at 1400 TBW or 3,000,000 hours which should last a good amount of time with these drives. You are also looking at a 5-year limited warranty through the entire lineup.

The A440 PRO comes in a small package. The front of the package is very colorful with large pictures of the SSD featured on it. There are many logos on the front starting with the T-Force logo on the top left corner and followed by CARDEA logos on the top right corners. Some of the most prominent features include the Graphene pad and NVMe PCIe Gen 4.0 support.

The back of the package lists down some specifications of the SSD and some performance figures which we will get to in a bit. 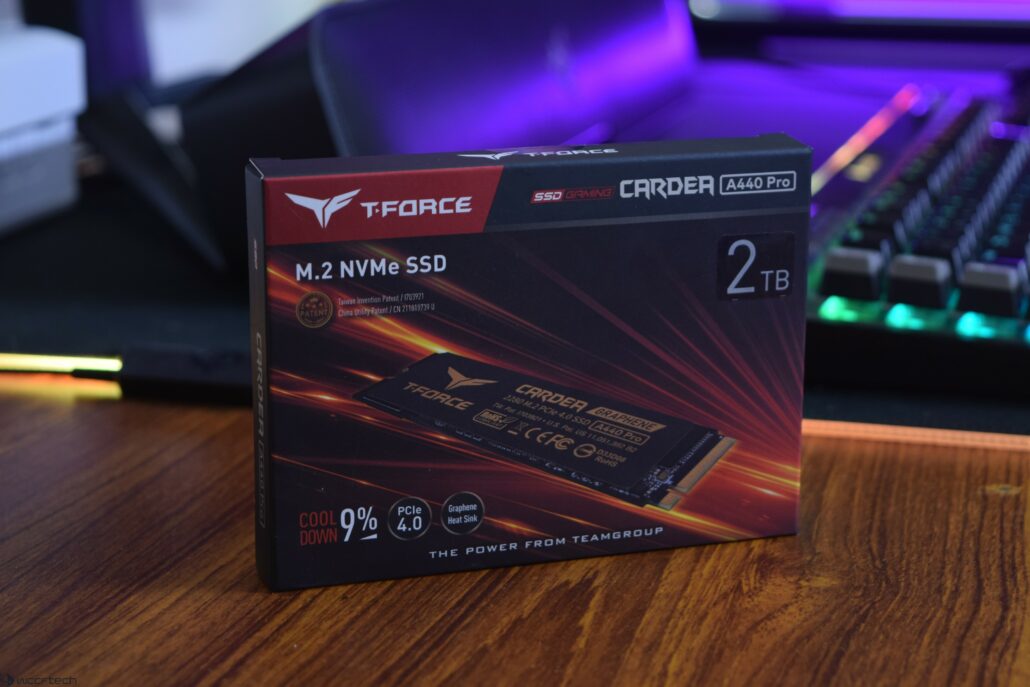 The package includes three items, one is the warranty booklet, the graphene pad, and the other is the drive itself. There’s also a T-Force case sticker inside the package which is a nice addition. 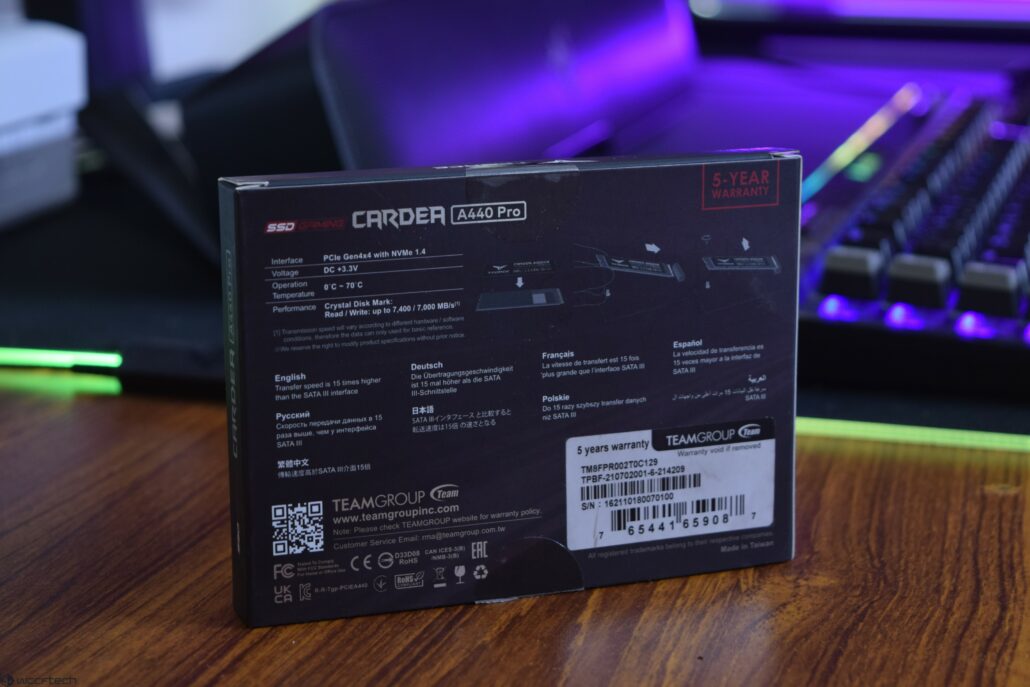 Out of the package, both drives come in the standard M.2 2280 form factor with the A440 PRO having a black-colored PCB. 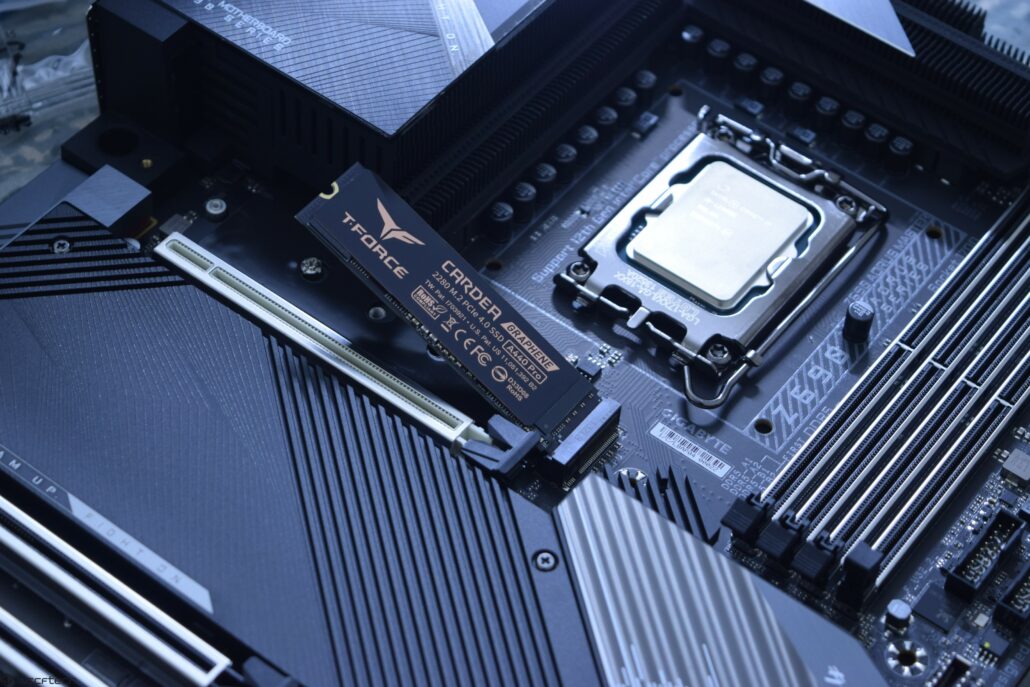 The front of the drives includes a specifications sticker and you can place the graphene pads on the exposed side of the PCB. The heatsink installation is pretty simple and requires you to slot the SSD into the bottom support which sets in place quite nicely. 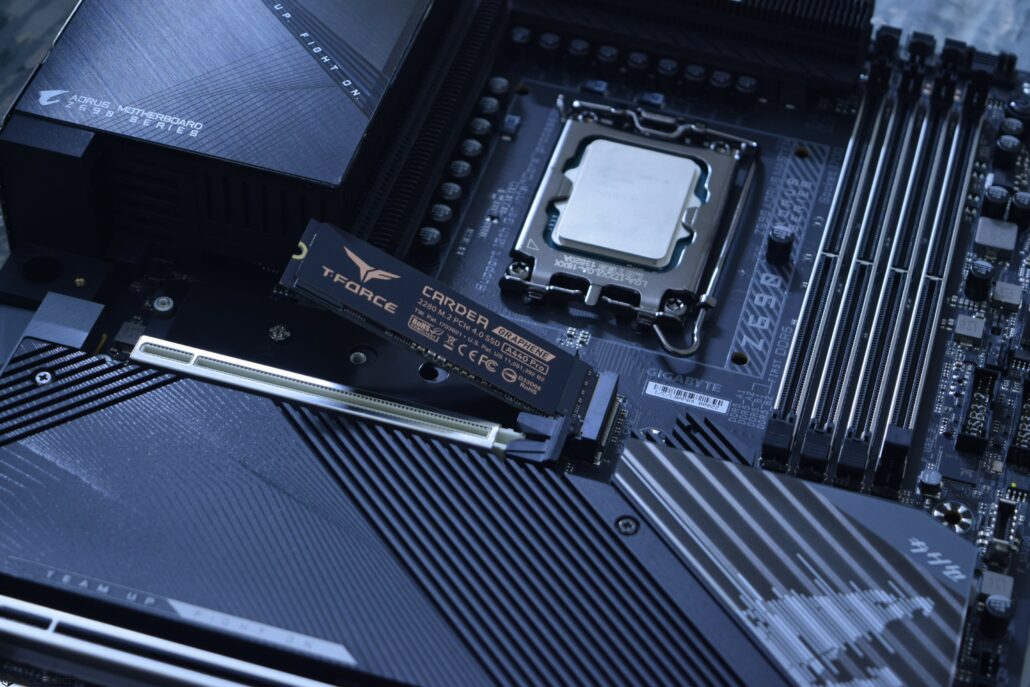 Our test platform for this review consisted of an Intel Core i9-12900K  processor which ran at stock clocks on the Z690 AORUS Master motherboard. The platform was coupled with 32 GB of DDR5 memory from G.Skill (Trident Z5/ 16 GB x 2) and the ASUS ROG Thor 1200W PSU. For graphics, I used the MSI GeForce RTX 3090 SUPRIM X. This rounds up as a high-end platform for tests with modern-day SSDs.

TeamGroup has been adding more performance to its A440 lineup starting with the original A440 which rocked a Gen 4 design with 7000/5000 (Read/Write) speeds. Now the PRO variant further extends the performance with up to 7400/7000 (Read/Write) speeds, putting it above the 980 PRO specturm. There’s also the A440 PRO Special edition designed for consoles which we will have a review on shortly.

Starting with the performance, the 2 TB drive costs $30 US more than the Samsung 980 Pro but is slightly cheaper than MSI’s Spatium M480. Do note that the heatsink version of each drive costs an extra but our variant features a Graphene pad which should be enough for cooling. As for overall performance, the A440 PRO outperforms the other flagship drives from MSI and Spatium while it also leaves the previous A440 in the dust. It offers excellent transfer rates and both synthetic/non-synthetic performance is simply outclass and the random 4K IOPS numbers are spectacular when compared to the other drives in our test suite.

Also looking at the temperatures above, you can see that the SSD performs within normal operating temps of under 70C. It does get slightly warm under intense stress tests such as benchmarks but nominal use temperatures average at around 60-63C. The Z690 AORUS Master motherboard we tested it on comes with a huge M.2 heatsink solution and that lowered the temperatures by a huge margin but the same results can also be expected on the other drives. 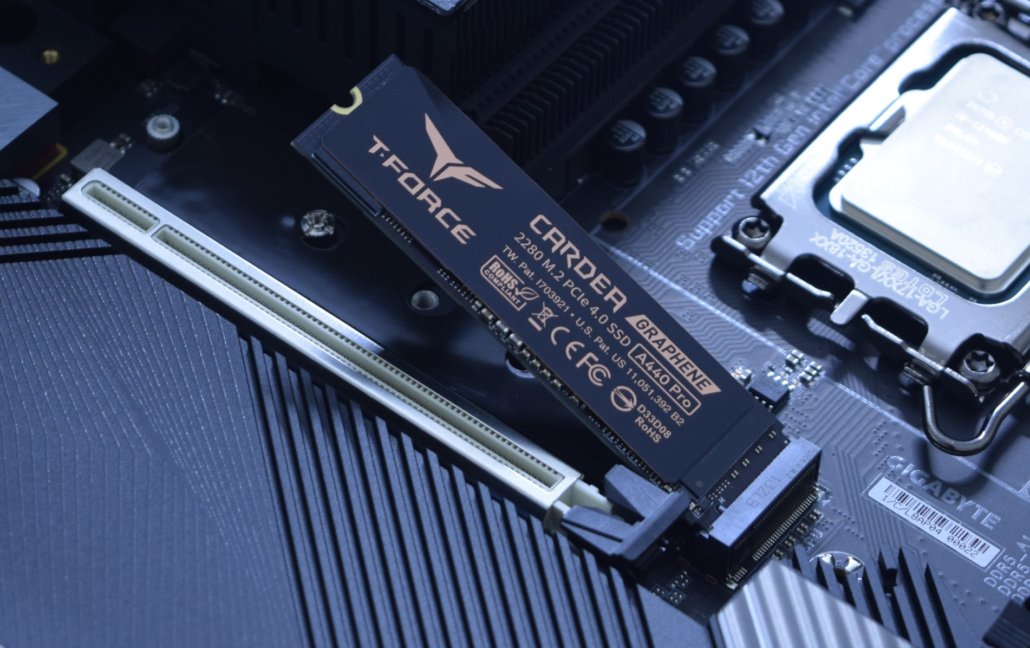 While the T-Force CARDEA A440 PRO is definitely not cheap, it is not meant to be since it aims for the performance segment and you will be paying more $ to get that speed advantage. The other SSDs competing with it are also priced in the $350 US category but if you are looking for one really speedy M.2 Gen 4 drive then the A440 PRO won’t disappoint. If speeds aren’t your thing, then you can go the cheaper route with several Gen 3 options that T-Force has to offer.