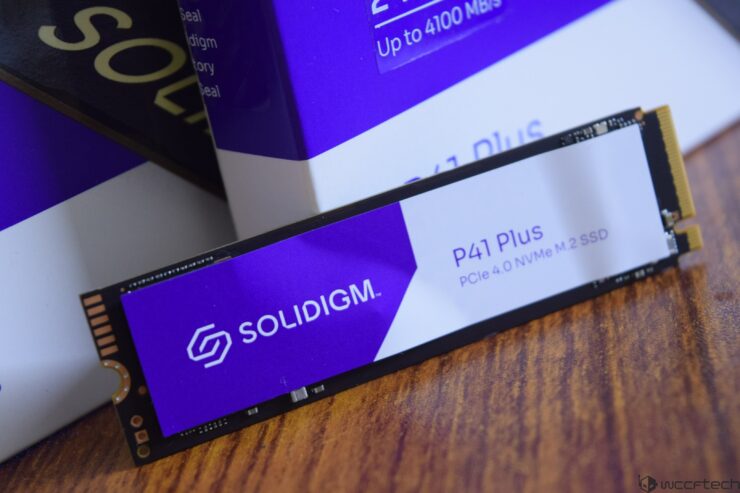 Remember Optane? The brand was recently killed off by Intel but one of its core divisions, the consumer SSD segment, was sold off to SK Hynix who rebranded it as Solidigm. The fairly new brand has recently launched its P41 Plus SSD series which aims at the mainstream PC segment. Solidigm believes that it can become a major player in the consumer SSD space which has been oversaturated by several brands recently too.

Solidigm has announced the Solidigm P41 Plus, the company’s first branded solid-state storage drive (SSD) since becoming a company in December 2021. The P41 Plus is an innovative PCIe 4.0 product that delivers the industry’s best combination of performance and value to PC users for everyday productivity and gaming.

Capable of delivering up to 4,125 MB/s sequential read speed, the Solidigm P41 Plus represents a breakthrough in cost efficiency, delivering great PCIe 4.0 performance at a price that won’t break the budget for everyday PC users.

The Solidigm P41 Plus Gen 4 NVMe SSDs come in three capacities: 512 GB, 1 TB, and 2 TB. All three capacities utilize the same Silicon Motion SMI SM2269XT controller and make use of 144-layer QLC NAND Flash. There’s no onboard DRAM and the devices come in the standard M.2 2280 form factor which makes them compatible with virtually any modern PC.

Performance with Impact on real-world workloads

In terms of performance, MSI’s SPATIUM M480 2 TB has sequential read speeds of 7000 MB/s and write speeds of 6800 MB/s. The Random read speeds of these drives are up to 650K IOPS and the write is 700K IOPS. The MSI SPATIUM M480 2 TB SSD has an idle power draw of 22mW and a maximum operating power of 8.2W. The endurance of the lineup is rated at 1400 TBW or 1,600,000 hours which should last a good amount of time with these drives. You are also looking at a 5-year limited warranty throughout the entire lineup.

The SSD comes in a small package. The package is colored white/purple and has large pictures of the SSD featured on it. The front also lists down some features such as capacities, maximum read speeds, and PCIe 4.0 NVMe M.2 form factor.

The back of the package lists some details along with the 5-year limited warranty that these come with.

The Solidigm P41 Plus SSD package includes the SSD itself along with a drive manual.

Out of the package, the drive comes in the standard M.2 2280 form factor and features a black PCB. There’s a white and purple Solidigm sticker on the front and a label sticker on the back.

Since the P41 Plus is a mainstream solution by Solidigm, it doesn’t feature any heatsink or flashy marketing to make it standout from the rest of the Gen 4 NVMe options. Solidigm is keeping things simple and that’s a plus.

The SOLIDIGM P41 PLUS SSDs utilize the  Silicon Motion SMI SM2269XT controller which is Gen 4 compliant and makes use of Solidigm’s 144-layer QLC NAND Flash.

Our test platform for this review consisted of an Intel Core i9-12900K processor which ran at stock clocks on the Z690 AORUS Master motherboard. The platform was coupled with 32 GB of DDR5 memory from G.Skill (Trident Z5/ 16 GB x 2) and the ASUS ROG Thor 1200W PSU. For graphics, I used the MSI GeForce RTX 3090 SUPRIM X. This rounds up as a high-end platform for tests with modern-day SSDs.

QLC is back in action with Solidigm’s P41 Plus series SSDs. We last saw it in action in the Intel Optane SSD series but from here on out, Solidigm will be the torch bearer and utilize the QLC NAND technology for its mainstream consumer SSDs. We got to take a good look at two drives from Solidigm, the 1 TB and 2 TB Gen 4 NVMe. In terms of performance, both SSDs landed right where we expected them. There’s nothing flashy to boast about and the DRAM-less drive makes them slightly less impressive but Solidigm’s real Ace is the value.

As of right now, the Solidigm P41 Plus 2 TB Gen 4 SSD is listed for $129.99 US whereas the 1 TB SSD is listed for $69.99 US. The 1 TB variant is an exceptional price and currently the cheapest Gen 4 TB variant that you can find at Newegg. Same is the case with the 2 TB variant which is priced real well and if these prices are maintained, then Solidigm has a killer product on their hand. For users who want to have a Gen 4 drive in larger capacities, I think one should really consider Solidigm P41 Plus series as an option.