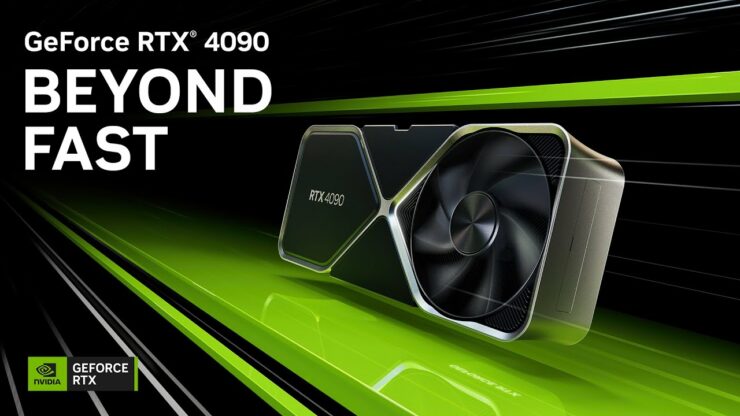 NVIDIA Takes Gaming To The Next Level With Its Next-Gen GeForce RTX 4090 BFGPU, Infused With The Fastest GPU On The Planet

NVIDIA’s GeForce RTX 4090 has been long-awaited and now it’s finally here. The graphics card is designed for enthusiasts and gamers who want the best visual fidelity and to achieve that, you want a powerful GPU considering how demanding the next-gen AAA titles have become. Keeping that in mind, NVIDIA didn’t push its next chip to be a few percent or 50% faster than the last gen but a whole 4x faster with DLSS and 2x faster in native resolution to make sure that their graphics cards are not just ready for the upcoming titles but also for enhanced features such as Ray Tracing, etc.

At the heart of the NVIDIA GeForce RTX 4090 graphics card lies the Ada Lovelace AD102 GPU. The GPU is said to measure around 600mm2 and will utilize the TSMC 4N process node which is an optimized version of TSMC’s 5nm (N5) node designed for the green team. The GPU features an insane 76 Billion transistors.

The NVIDIA Ada Lovelace AD103 GPU is expected to feature up to 7 GPC (Graphics Processing Clusters). This is the same GPC count as the Ampere GA102 GPU and one additional GPC over the GA103 GPU. Each GPU will consist of 6 TPCs and 2 SMs which is the same configuration as the existing chip. Each SM (Streaming Multiprocessor) will house four sub-cores which is also the same as the GA102 GPU. What’s changed is the FP32 & the INT32 core configuration. Each sub-core will include 128 FP32 units but combined FP32+INT32 units will go up to 192. This is because the FP32 units don’t share the same sub-core as the IN32 units. The 128 FP32 cores are separate from the 64 INT32 cores.

Moving over to the cache, this is another segment where NVIDIA has given a big boost over the existing Ampere GPUs. The Ada Lovelace GPUs will pack 192 KB of L1 cache per SM, an increase of 50% over Ampere. That’s a total of 4.5 MB of L1 cache on the top AD102 GPU. The L2 cache will be increased to 96 MB as mentioned in the leaks. This is a 16x increase over the Ampere GPU that hosts just 6 MB of L2 cache. The cache will be shared across the GPU.

Finally, we have the ROPs which are also increased to 32 per GPC, an increase of 2x over Ampere. You are looking at up to 384 ROPs on the next-gen flagship versus just 112 on the fastest Ampere GPU, the RTX 3090 Ti. There are also going to be the latest 4th Generation Tensor and 3rd Generation RT (Raytracing) cores infused on the Ada Lovelace GPUs which will help boost DLSS & Raytracing performance to the next level. Overall, the Ada Lovelace AD102 GPU will offer:

The NVIDIA GeForce RTX 4090 will use 128 SMs of the 144 SMs for a total of 16,384 CUDA cores. The GPU will come packed with 96 MB of L2 cache and a total of 384 ROPs which is simply insane but considering that the RTX 4090 is a cut-down design, it may feature slightly lower L2 and ROP counts. The clock speeds are not confirmed yet but considering that the TSMC 4N process is being used, we are expecting clocks between the 2.0-3.0 GHz range.

As for memory specs, the GeForce RTX 4090 is expected to rock 24 GB GDDR6X capacities that will be clocked at 21 Gbps speeds across a 384-bit bus interface. This will provide up to 1 TB/s of bandwidth. This is the same bandwidth as the existing RTX 3090 Ti graphics card and as far as the power consumption is concerned, the TBP is said to be rated at 450W which means that TGP may end up lower than that. The card will be powered by a single 16-pin connector which delivers up to 600W of power. It is likely that we may get 500W+ custom designs as we saw with the RTX 3090 Ti.

As for the performance of these monster GPUs, we can only use theoretical numbers here since the launch is a bit far away but based on what we know, the RTX 4090 series cards might be the first gaming cards to hit the 100 TFLOPs compute horsepower limit.

Based on a theoretical clock speed of 2.8 GHz, you get up to 103 TFLOPs of compute performance and the rumors are suggesting even higher boost clocks. Now, these are definitely sounding like peak clocks, similar to AMD’s peak frequencies which are higher than the average ‘Game’ clock. A 100+ TFLOPs compute performance means more than double the horsepower versus the 3090 Ti flagship. But one should keep in mind that compute performance doesn’t necessarily indicate the overall gaming performance but despite that, it will be a huge upgrade for gaming PCs and an 8.5x increase over the current fastest console, the Xbox Series X.

This will be a 2x compute performance uplift for each graphics card versus its predecessor and this is without even factoring in the RT and Tensor core performance which are expected to get major lifts too in their respective department. Now FLOPs aren’t necessarily reflective of the graphics or gaming performance but they do provide a metric that can be used for comparison. A 2-2.5x gain over the RTX 3090 & RTX 3090 Ti would be very disruptive and it makes sense why NVIDIA is going so hard with higher power limits on their cards.

Gamers should expect 4K gaming to be buttery smooth on these graphics cards and with DLSS, we might even see playable 60 FPS at 8K resolution which is something that NVIDIA has been trying to achieve with its RTX 3090 series BFGPUs for a while now.

Now coming to the prices, the NVIDIA GeForce RTX 3090 Ti & RTX 3090 graphics cards are without a doubt the most expensive single-chip GPUs to date. The NVIDIA GeForce RTX 4090 is going to come at a price of $1599 US for the Founders Edition variant and will be available on the 12th of October.

The NVIDIA GeForce RTX 40 series graphics cards are rumored for a mid-July launch and while we have seen cooler shrouds of the RTX 4090 Ti leak out earlier, NVIDIA could still release the non-Ti variant first with the RTX 4090 Ti variant hitting the market much later. But this wouldn’t be the first time that NVIDIA releases a high-end SKU during the very start of its next generation. The RTX 2080 Ti flagship was launched with the rest of the lineup even though its predecessor, the GTX 1080 Ti appeared months after the launch of the initial lineup. The RTX 3090 launched with the initial line of RTX 30 series cards but the 3090 Ti came more than a year late. This time, NVIDIA could launch the entire family from the start and go for a mid-cycle refresh later on but that remains to be seen.

As of now, the rumors point out the Mid-July launch so we have to wait two more months to see how well that goes!

Which NVIDIA GeForce RTX 40 series graphics card are you looking forward to the most?